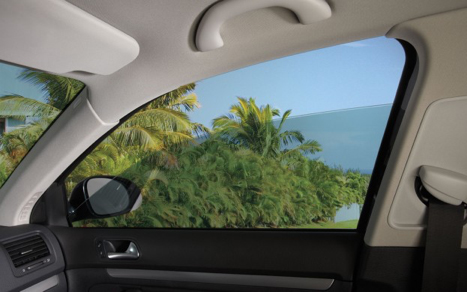 Crystalline line rejects 99.9 percent of UV radiation and 90 to 97 percent of infrared radiation.

While window tint is nothing new, 3M’s Crystalline films are several shades lighter than your average window tint — almost clear, in fact — and are claimed to reflect just as much energy if not more. According to Jon Hanbury, Marketing Manager for 3M’s Renewable Energy Division, clear window films were developed mostly for drivers who wanted the benefits of tinting without having to darken their windows, which could potentially reduce visibility at night.

To better demonstrate the film’s ability to reject heat, 3M had a table set up with small halogen lamps, each with several glass slides that could be inserted in front of the lamp’s beam. Each slide was laminated with a different film, with one left uncovered as a control. Waving your hand over the plain glass slide, you could feel the lamp’s heat passing through virtually unimpeded. When you inserted the slide with the traditional tint applied, there was a noticeable decrease in the heat radiating from the lamp. The 3M clear film slide, which didn’t look that much darker than the plain glass, seemed to reduce heat even further.

ccording to 3M, the company’s clear films will allow anywhere from 40 percent to 90 percent of visible light into a car, depending on which grade is chosen. Also dependent upon which grade is chosen is the amount of solar energy rejected, which ranges from 34 percent to 60 percent. To put that into perspective, the darkest conventional tint 3M offers only rejects 45 percent of solar energy while allowing only 6 percent of visible light in. Although the amount of light and heat let in varies, 3M claims that all films in the Crystalline line reject 99.9 percent of UV radiation and 90 to 97 percent of infrared radiation. Because these films significantly reduce exposure to UV rays, they are recommended by the Skin Cancer Foundation as an effective defense against ultraviolet radiation — which it identifies as a leading cause of skin cancer.

Reducing the heat allowed into a car’s interior by 60 percent could mean the difference between being greeted by a bearably warm seat or burning your hand on the gear selector. It’s conceivable, then, that a cabin that doesn’t get as hot wouldn’t need to run the air conditioning as frequently or as high. If the AC system doesn’t have to work as hard, then the engine doesn’t have to work as hard. While it’s true that reducing AC usage would improve fuel economy, 3M currently has no data on just how much.

Anyone that does a lot of driving — for work or otherwise — can likely appreciate cooler interior temperatures and not having to wear sunscreen in the car. With costs ranging from $700 to $990, installation of 3M’s window films isn’t exactly cheap. But if the films deliver all the benefits listed above and can also be proven to get better fuel mileage, it just might justify the cost. In an age where the national average price for gas is creeping up on four dollars per gallon, every little bit counts.